A fantastic fungal species, shown to have the unique & uncanny ability to pass through the blood brain barrier, directly stimulating the growth of neurons and protective cells in the central nervous system (AKA brain and spinal cord).

The fruiting body of Lion’s mane is identifiable by its numerous, conical spines, drooping towards the ground and tapering to a point. Each spine is soft and typically half-an-inch to 2 inches in length. These spines are white when young and yellowish when older. Typically grows as a single clump.

If you misidentify H. erinaceus, don't fret. All other species are very edible, delicious, and grow throughout the same habitats.

Lion's mane and other species in the Hericiaceae family are not selective on which logs they grow. They can commonly be found on maple, beech, oak, sycamore, birch, and walnut trees. It can be found throughout North America, Europe, and Asia. Typically the erinaceus species fruits between August and December, and will produce spores through February. They are resilient to cold and frosty conditions! 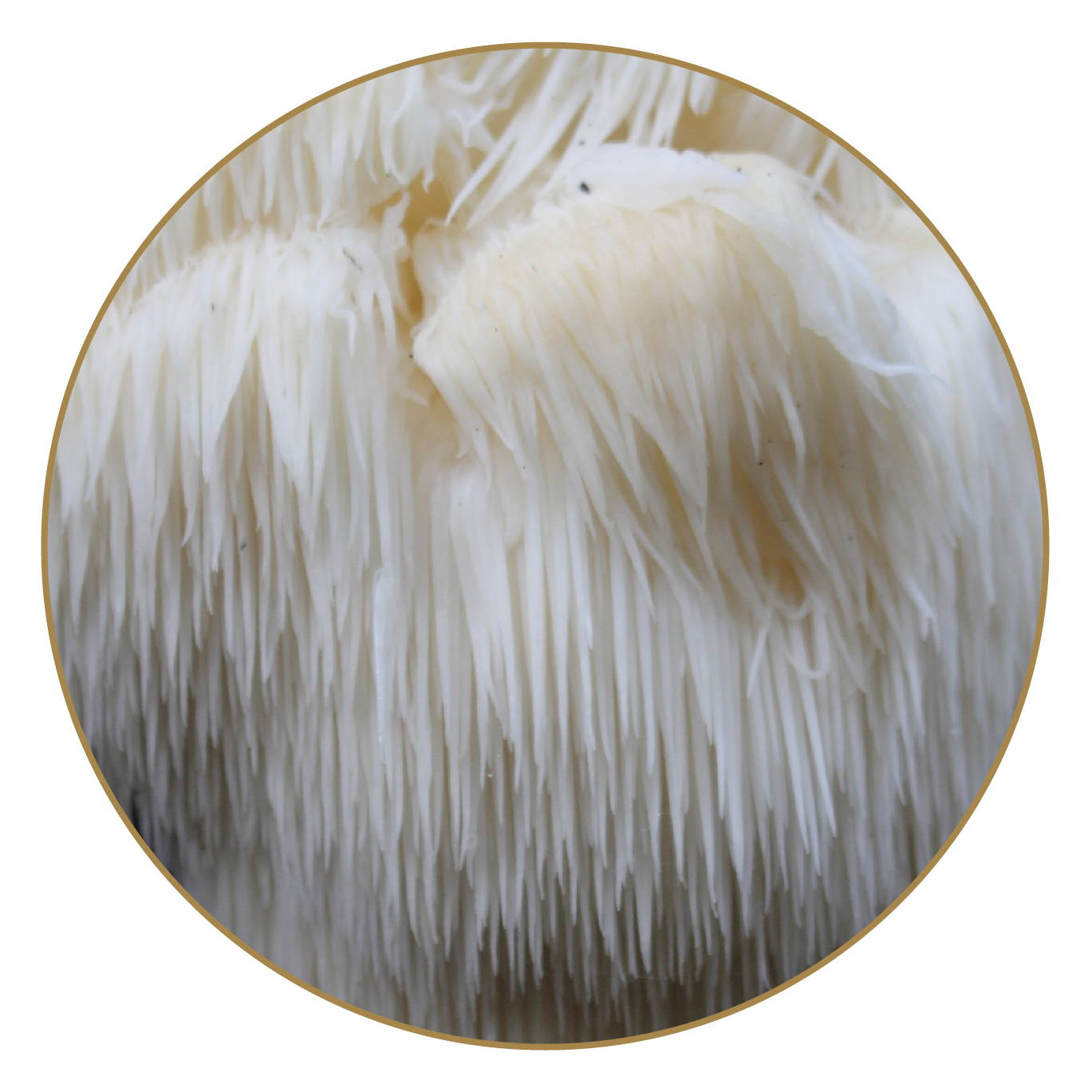 Pick Lion's mane while it is still white for the best flavor. If they are pinkish in hue, they have likely developed too far for a favorable dining experience. Cut the fruiting body from the base with a sharp paring/curved knife. Choose the cleanest mushrooms you can find if you are harvesting from a large patch.

Don't be afraid to take almost all of the mushroom when harvesting; it lives only on dead wood and appears only after thoroughly establishing itself. Leaving a small amount of fruiting body will allow for better spawning of the next round of fruiting bodies and will give you a chance to find the patch later on!

Carry the mushrooms in a net bag to allow dirt and debris to fall from its body during transport without crushing the spines. Treat the delicate lion's mane fungus gently to prevent bruising.

Known as "Hou Tou Go" in Chinese, translating literally to “monkey brain”, although it’s commonly stated that eating Lion's mane would give one nerves of steel and the memory of a lion.

In traditional Chinese medicine, it is used to treat ulcers and other problems of the gastrointestinal system. In North America, native Indian tribes used it as an anti-hemorrhagic (blood clotting) agent, applying it to the wound in dried and pulverized form.

Historically, Lion's mane was reserved only for royalty. Its tender white flesh tastes similar to seafood (lobster/crab) and compliments many different types of cuisine. For most of the human relationship with Lion's mane it has been harvested mostly for food purposes as a delicacy!

Benefits take time to settle in, yet they compound upon each other with long term use.

Cyathane derivatives – This describes a group of three carbon ring structures, resembling cholesterol, with low molecular weight, also found in birds nest fungi, which have been studied for neuroregenerative effects. Meaning they help generate new neurons in our nervous system.

Erinacines – Similar to the above, but named for the Lion’s Mane genus.

Hericenones – Another cyanthane derivative that stimulates nerve growth factor (NGF-2) and crosses the blood brain barrier. It differs from the above constituents, having a six membered ring with various functional groups and a medium length carbon chain.

Beta-D-glucans –Polysaccharides with a range of actions dependent on exact structure and origin. Most widely known for lowering LDL cholesterol levels.

Ergosterol – a precursor to Vitamin D2, which is technically Vitamin D, however D2 is still a precursor to the form our bodies use, D3. May help lower cholesterol levels by acting in a similar way to statins.

Several pharmacological actions have been documented for Lion's Mane, based primarily on in vitro and animal studies.

Lion's mane is able to prevent build up of amyloid plaques that typically initiate and progress Alzheimer's disease. It may also help protect against Parkinson's disease by preventing dopamine neuronal loss by preventing apoptosis caused by oxidative stress. It has also been shown to prevent damage due to ischemic events. (1)

Lion's mane has been shown to directly promote nerve growth factor synthesis, via stimulation of NGF-2, in astrocytes as well as the hippocampus. Hericenone E can potential help regenerate neural cells and tissues in the brain, spinal cord, and retina. (2)

Lion's mane also has research showing that it may prevent metastases by preventing the expression of extracellular matrix degrading enzymes such as MMP-2 & -9, and u-PA. Cerebroside E may also inhibit VEGF induced tube formation which plays a role in cancer metastases. (4)

Finally Lion's mane is a great tool to use during chemotherapy as it lessens neurotoxic and nephrotoxic (kidney) effects preventing further damage to these sensitive organs.

Evidence from animal research shows that administering polysaccharides from Hericium erinaceus daily for 28 days increases exhaustive swimming times by about 18% to 58% in mice. This anti-fatigue effect is attributed to the ability of these polysaccharides to decrease blood lactic acid (BLA), serum urea nitrogen (SUN), and malondialdehyde (MDA); increase glycogen content of tissue; and increase the activity of antioxidant enzymes. (6)

There is a possibility Lion's mane can protect against vascular disease by preventing LDL oxidation and HMG-CoA reductase activity by over 60%. (7)

In vitro research shows that a polysaccharide from Hericium erinaceus mycelium can interfere with the proliferation of precancerous gastric epithelial cells, a model for chronic atrophic gastritis, by inducing cell cycle arrest. (8)

We utilize Lion's mane in our Day formula, which is a blend of nootropic, energy supplying, and performance optimizing herbs and nutrients that allow the body to establish healthy connections and communication throughout all it's systems.