is the most effective out there

1. FRUITING BODY ONLY -  we only use the fruiting bodies,

2. CONCENTRATED EXTRACTS - to produce the most potent and powerful immune health supplement on the market.

3. SCIENTIFICALLY VERIFIED - Each batch of products are tested, and scientifically verified for their Beta-Glucan content ensuring you get exactly what you’re paying for in each dose.

5. ENHANCED MICRONIZED FORMULA - we micronize our

powders for increased bioavailability and efficacy in the body. 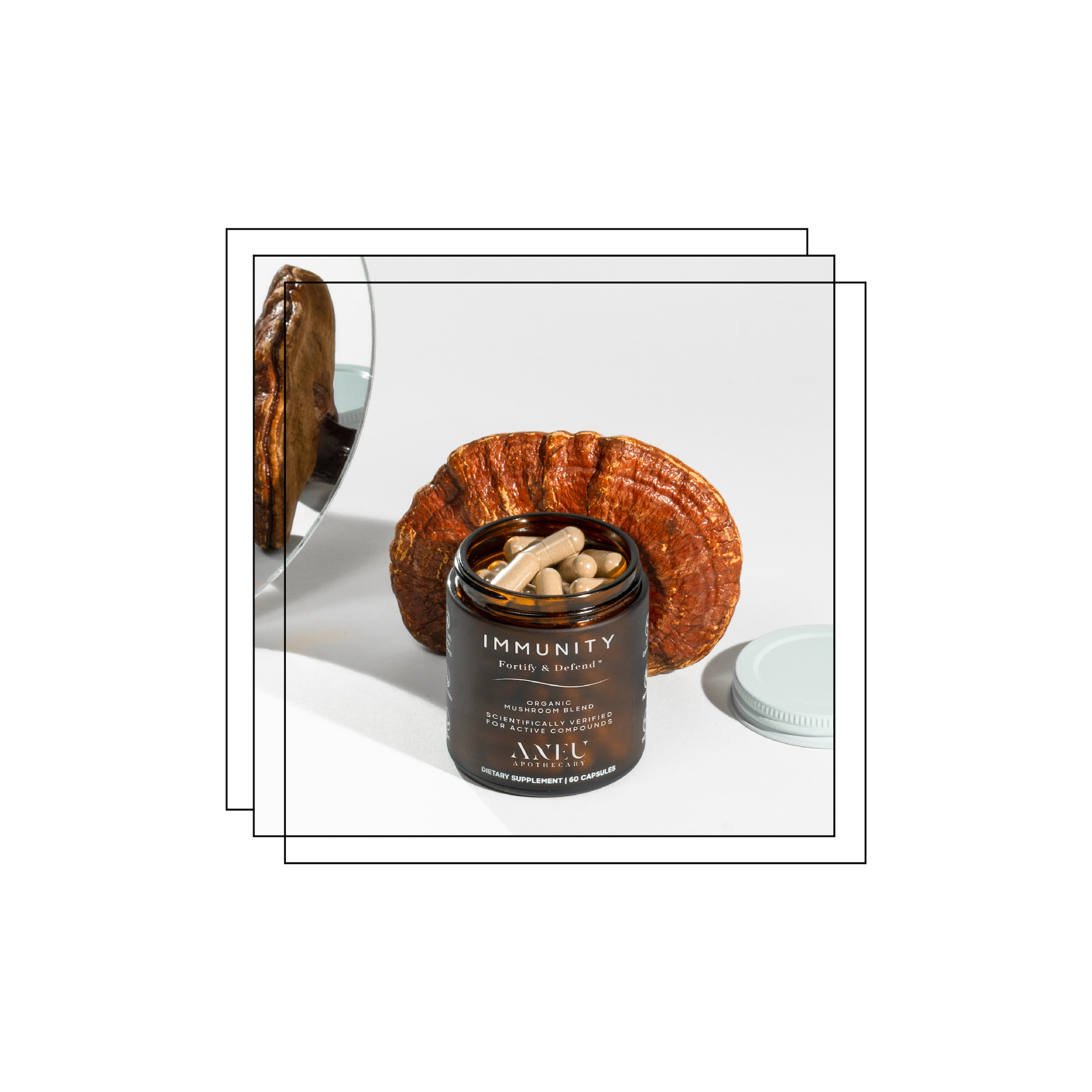 The 8 Best Mushrooms to Fortify Immunity 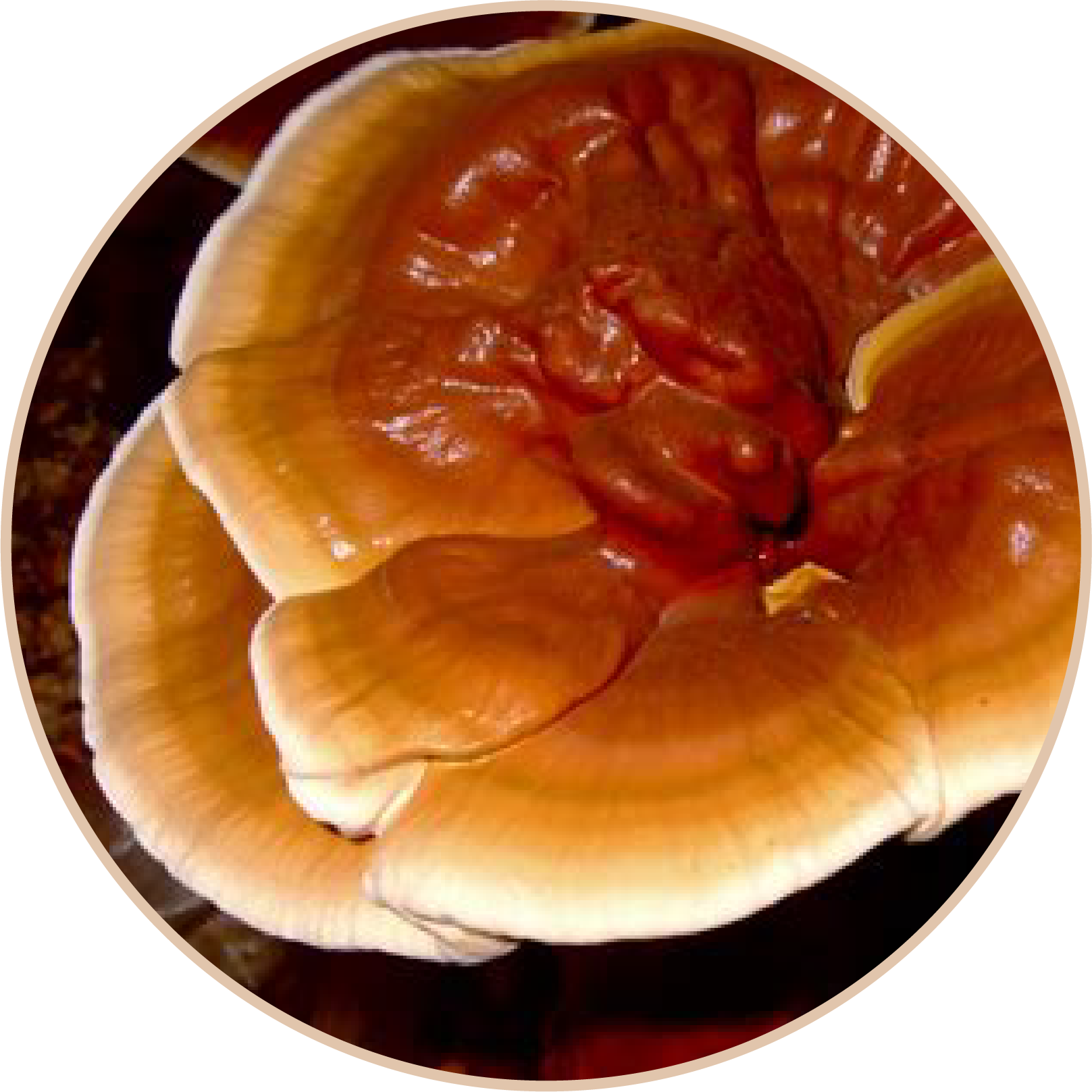 Reishi mushrooms have been used in medicine for over 2,000 years and have been touted for their many different effects on numerous bodily systems. 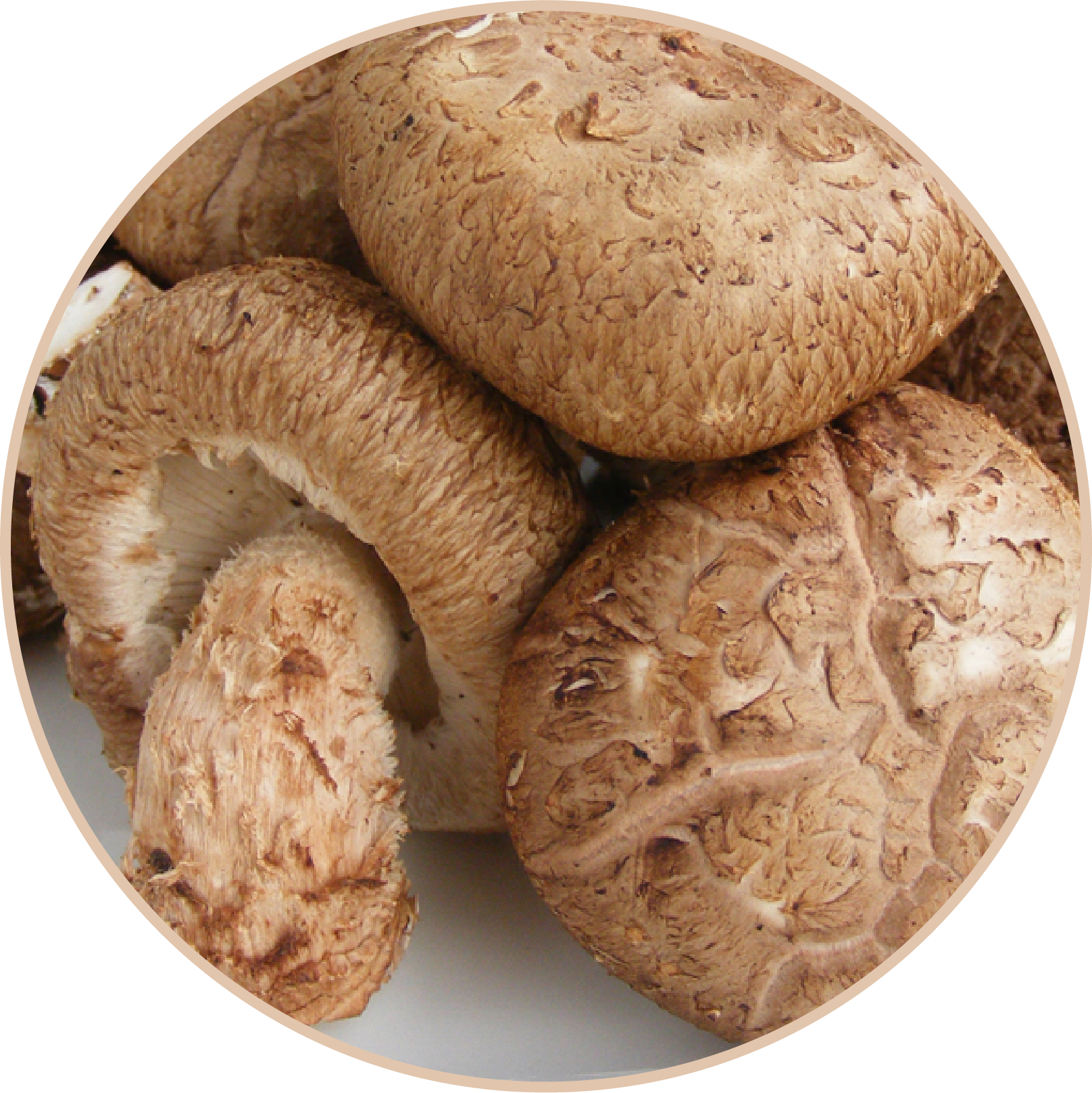 One of the most popular mushrooms in the world, the Shiitake mushroom is used by culinary experts for its rich, savory flavors and by natural medicine practitioners for its numerous health benefits. 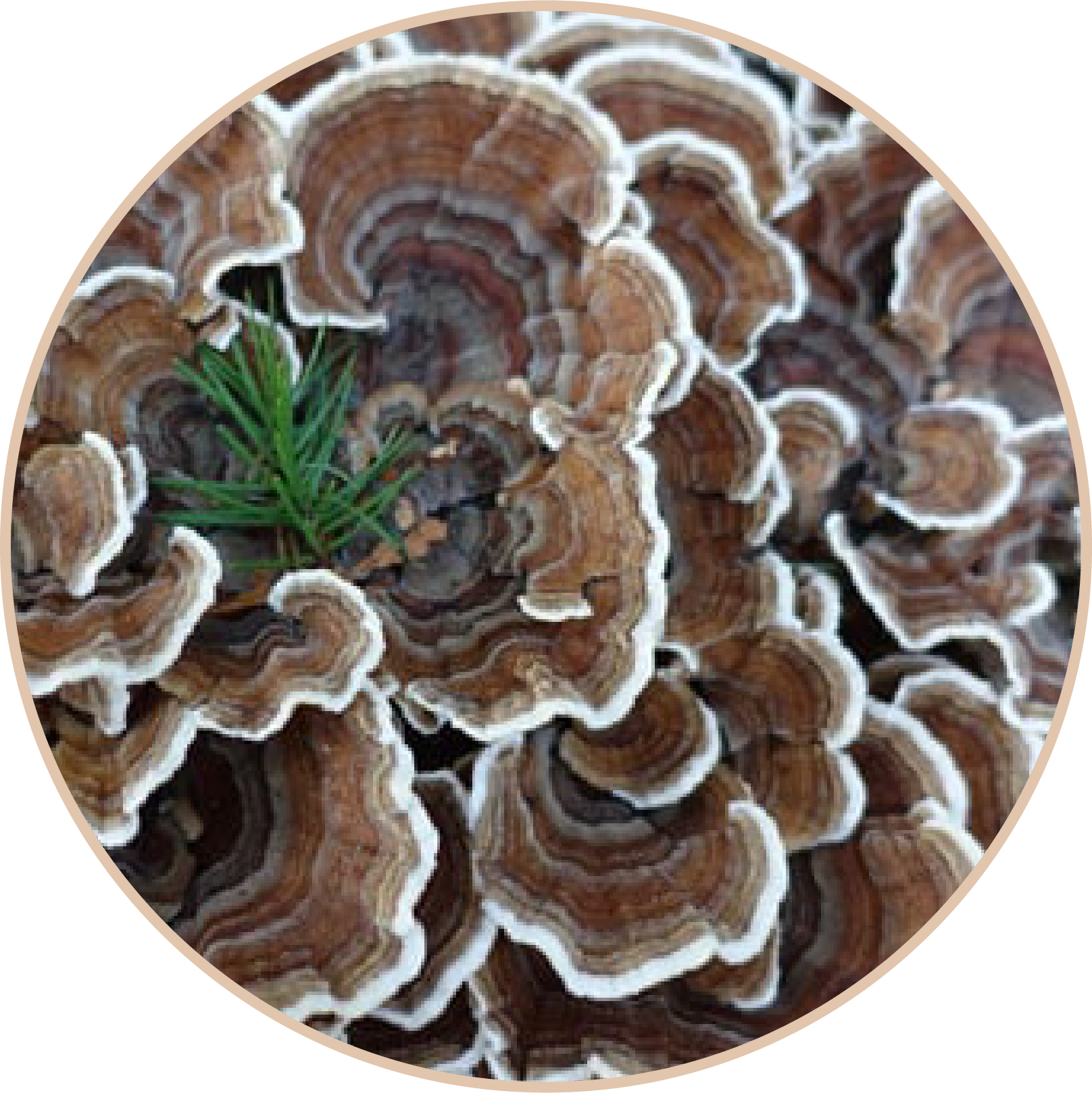 This polypore mushroom gets its name from the brilliant array of colors it displays in forests around the world. And while it’s been used ancestrally for centuries to promote longevity, only now are we fully understanding it’s incredible immune health functions. 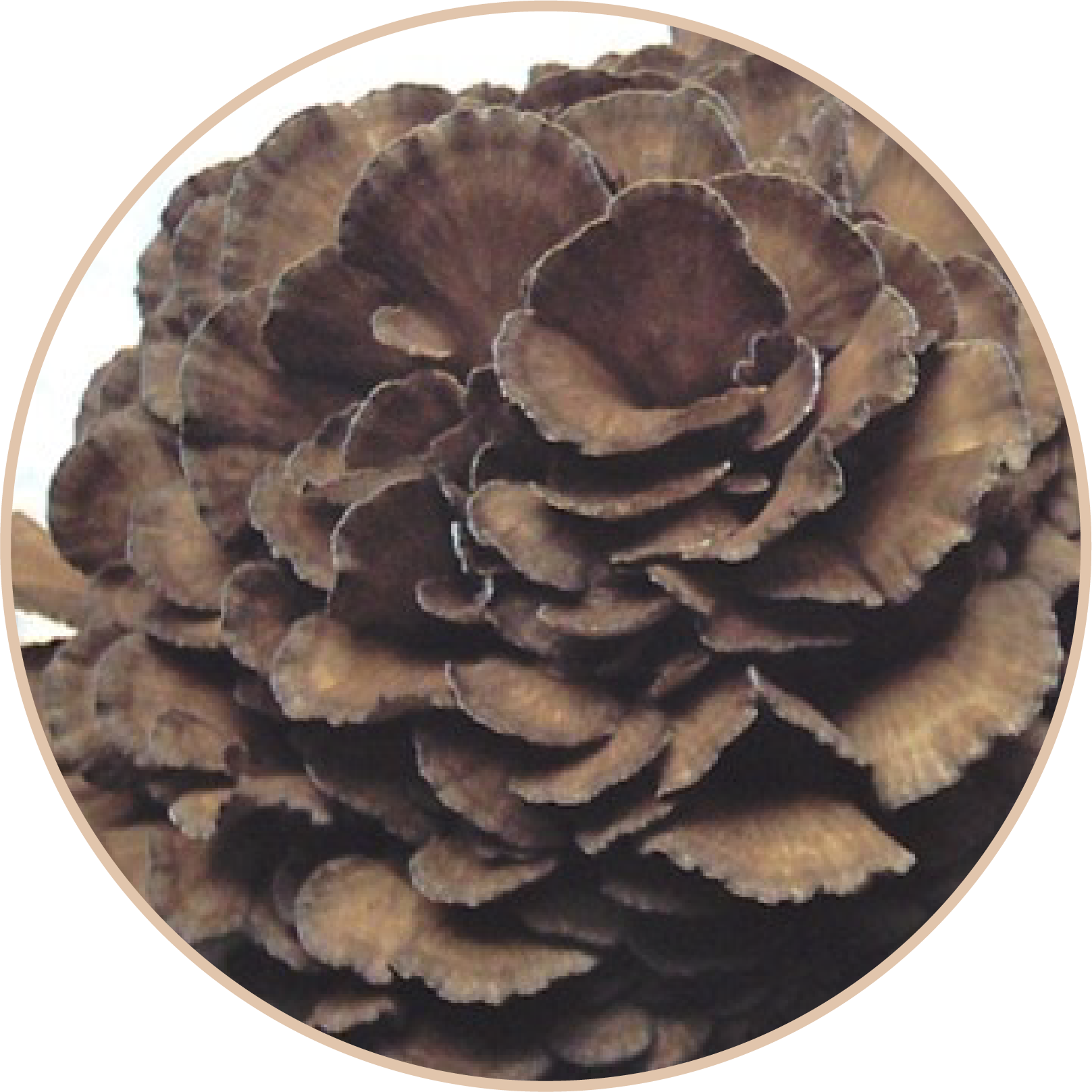 Maitake means “dancing mushroom” in Japanese and folklore claims it got its name from when the early Japanese discovered it and danced with joy upon discovering it in the wild because of it’s amazing healing benefits. It’s one of the rare types of mushrooms that functions as an adaptogen, which helps harmonize any mental or physical systems in the body that’ve gotten out of balance. 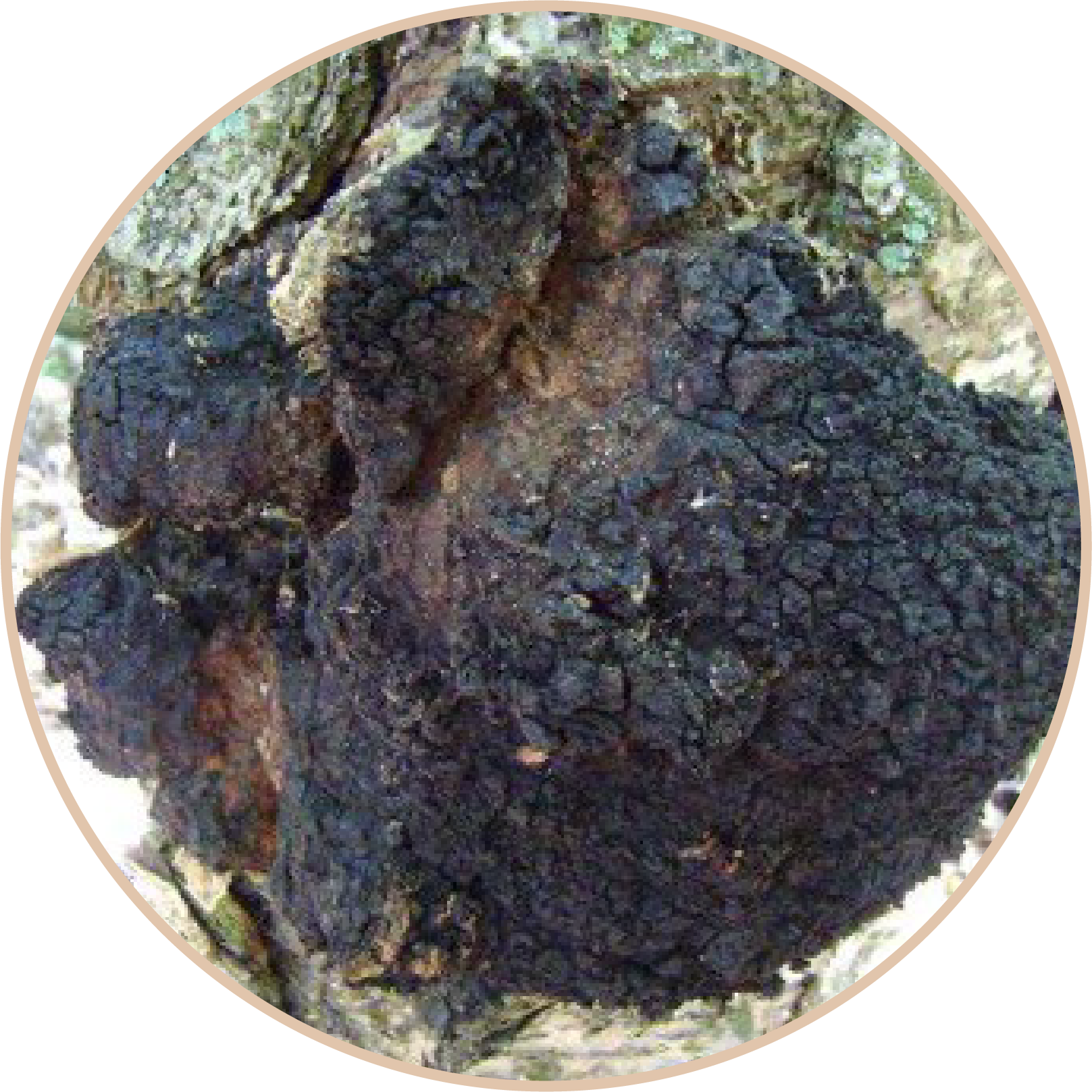 Chaga traditionally grows as a canker on the side of birch trees. It has been used in traditional medicine in Russia and Northern Europe for centuries to treat a number of issues. One of the most promising effects of Chaga Mushrooms is how it helps regulate the growth of harmful bacteria in the Gut Microbiome, and allows good bacteria to flourish. 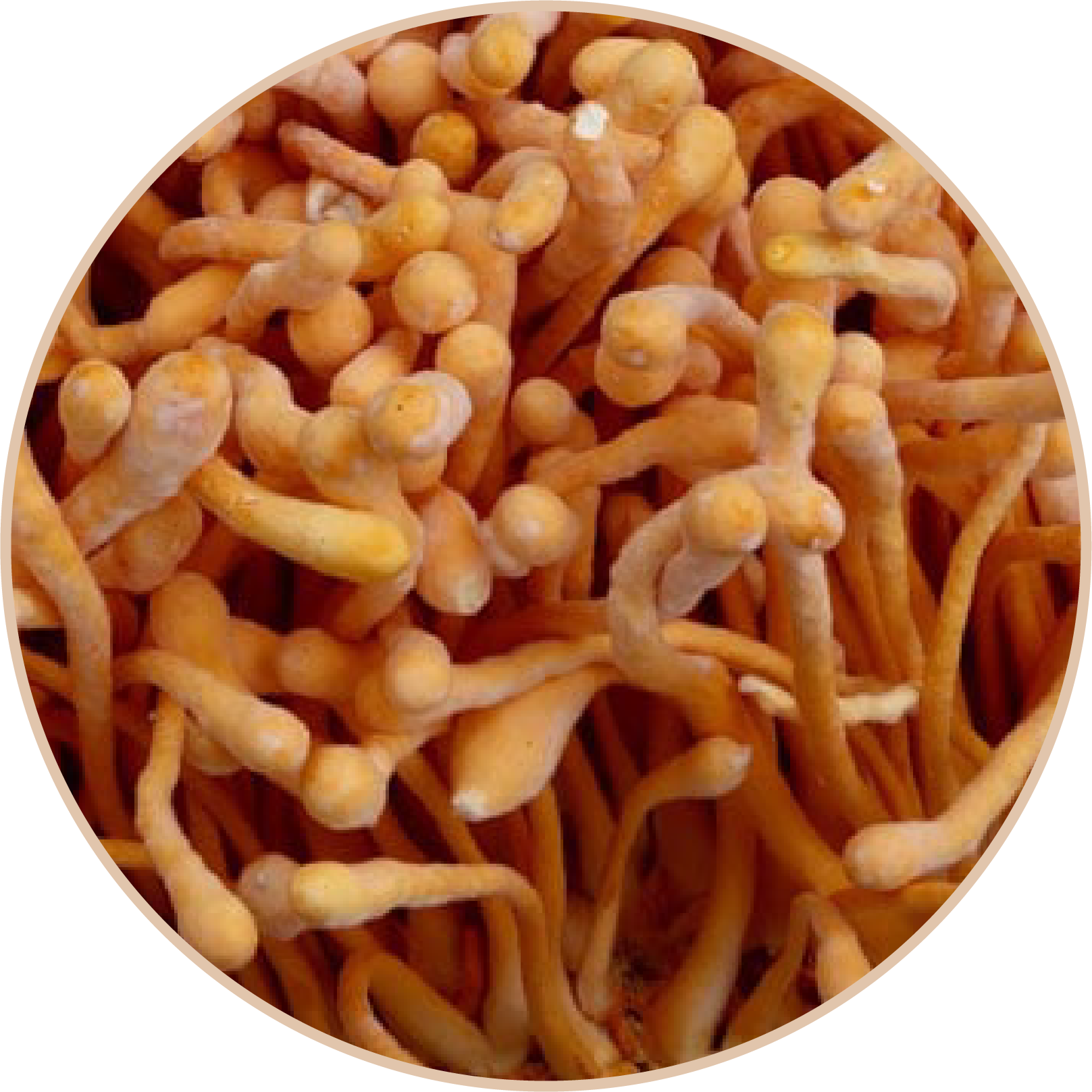 Cordyceps have been used in Traditional Chinese Medicine for centuries to treat fatigue, sickness, kidney disease and low sex drive… and today, we’re learning they do so much more. 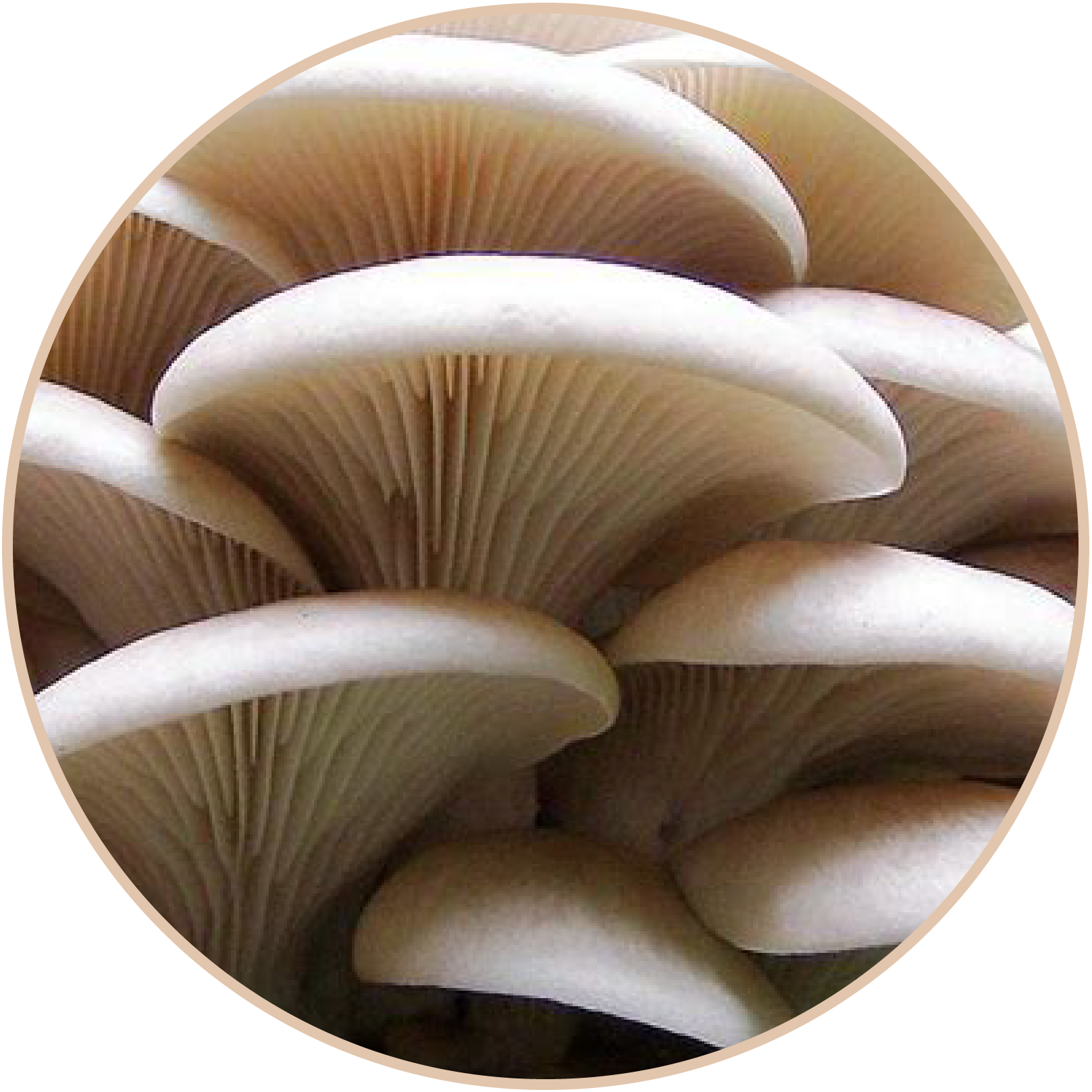 Oyster mushrooms are used by culinary experts for their distinct flavors and natural health practitioners for its incredible host of health benefits. Helping your Immune system against short term & long term illness, reducing cholesterol, supporting strong bones, and protecting against neurodegenerative diseases (like Alzheimer’s, Parkinson’s, and Dementia), this is one of the most versatile all-stars in the fungi kingdom. 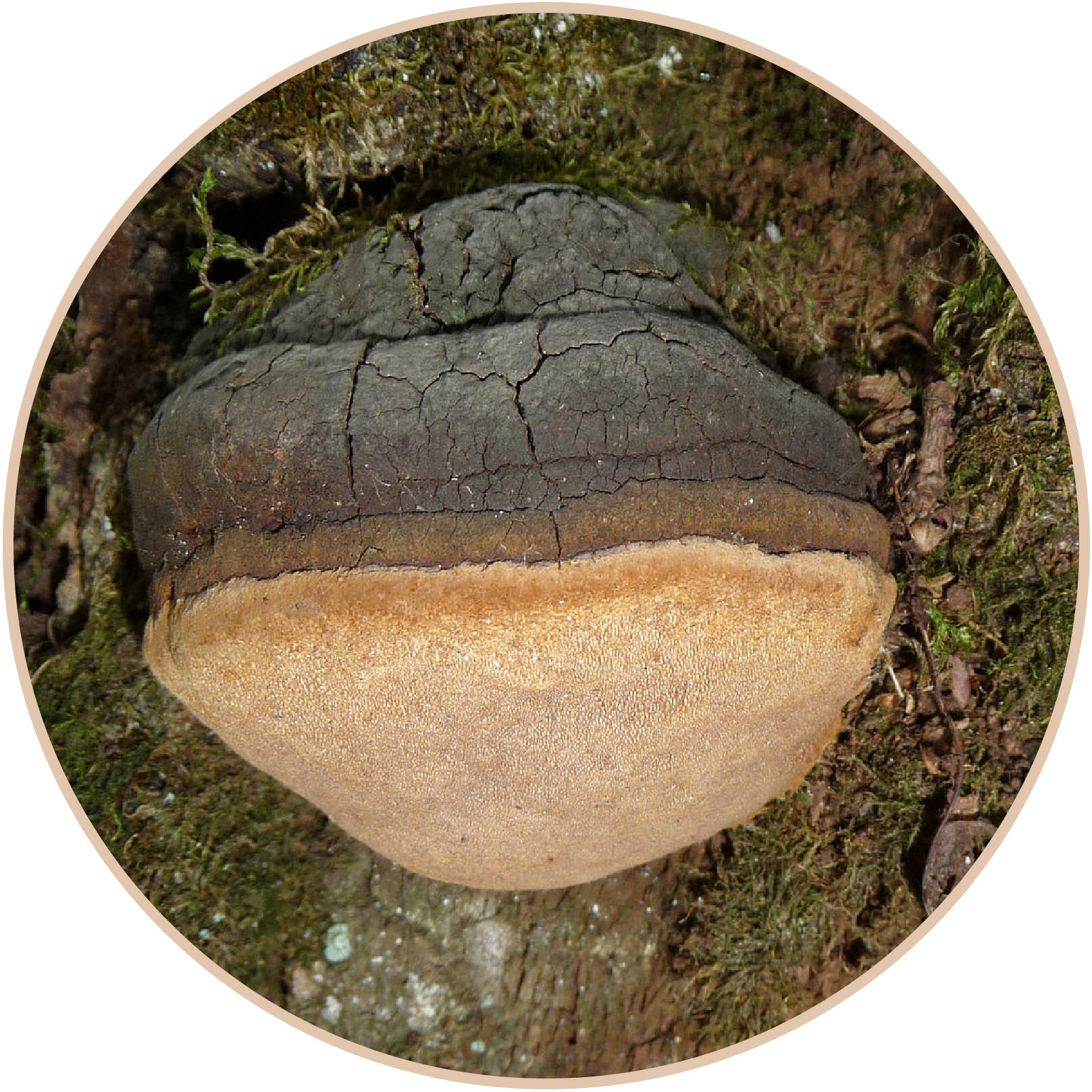 YOUR IMMUNE SYSTEM WILL THANK YOU!

Try a 30 day supply and if you

the bottle within 45 days

for a full refund.

NO RISK, ONLY REWARD. 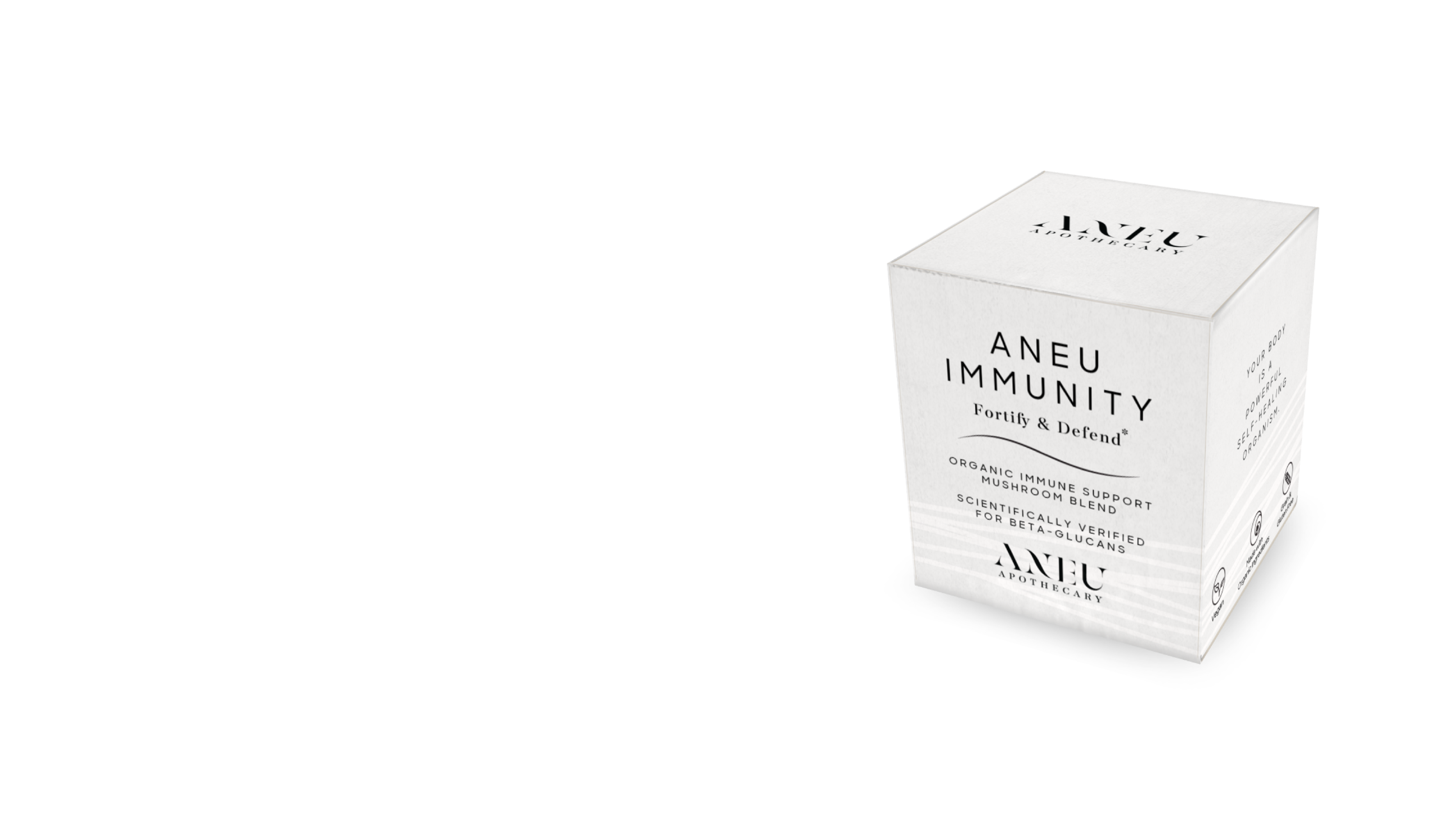 Nature is the best teacher."

Not all Mushrooms are MADE Equal

The vast majority of the mushroom supplements on the market today are grown on rice grain, the mycelium (similar to the “root system” you’d see in plants) is harvested along with the fruiting body, and ground into the end product.

when looking for the right mushroom supplements…

1. Are they grain grown or wood grown mushrooms?

It’s cheap to mass produce them this way, but when mushrooms are grown on hardwood (like they grow naturally in the environment) they contain significantly more Beta-Glucans… which in the end is why we’re buying them.

2. Do they use the Mycelium or fruiting body?

The mycelium is a huge portion of the volume of the fungi, which makes it attractive to include in the harvest… but that’s not where the majority of the benefits are found. The part of the fungi that contains the majority of the active compounds are the fruiting body, the part most of us would visually identify as a mushroom. And these are the smaller part of the organism on the whole, typically the only part we see above ground. It’s easy to understand why a corporation would want to increase their yield with each harvest by including the mycelium, but the consumer ends up spending money on inactive product, wasting money, and getting very little of the benefits they are seeking.

3. do they use biomass or Extracts?

The last dirty secret of the mushroom industry is that most companies simply grind up the mycelium, spores, and fruiting bodies together, and serve them in capsules or powders. As opposed to using steam or alcohol to produce a concentrated extract to elevate the potency. Most mushrooms are 90% water, it’s in the last 10% that most of the bioactive and medicinal compounds are found. By using a concentrated extract, you’re removing the water and gaining 8-16X more of the active compounds to support your immune health. 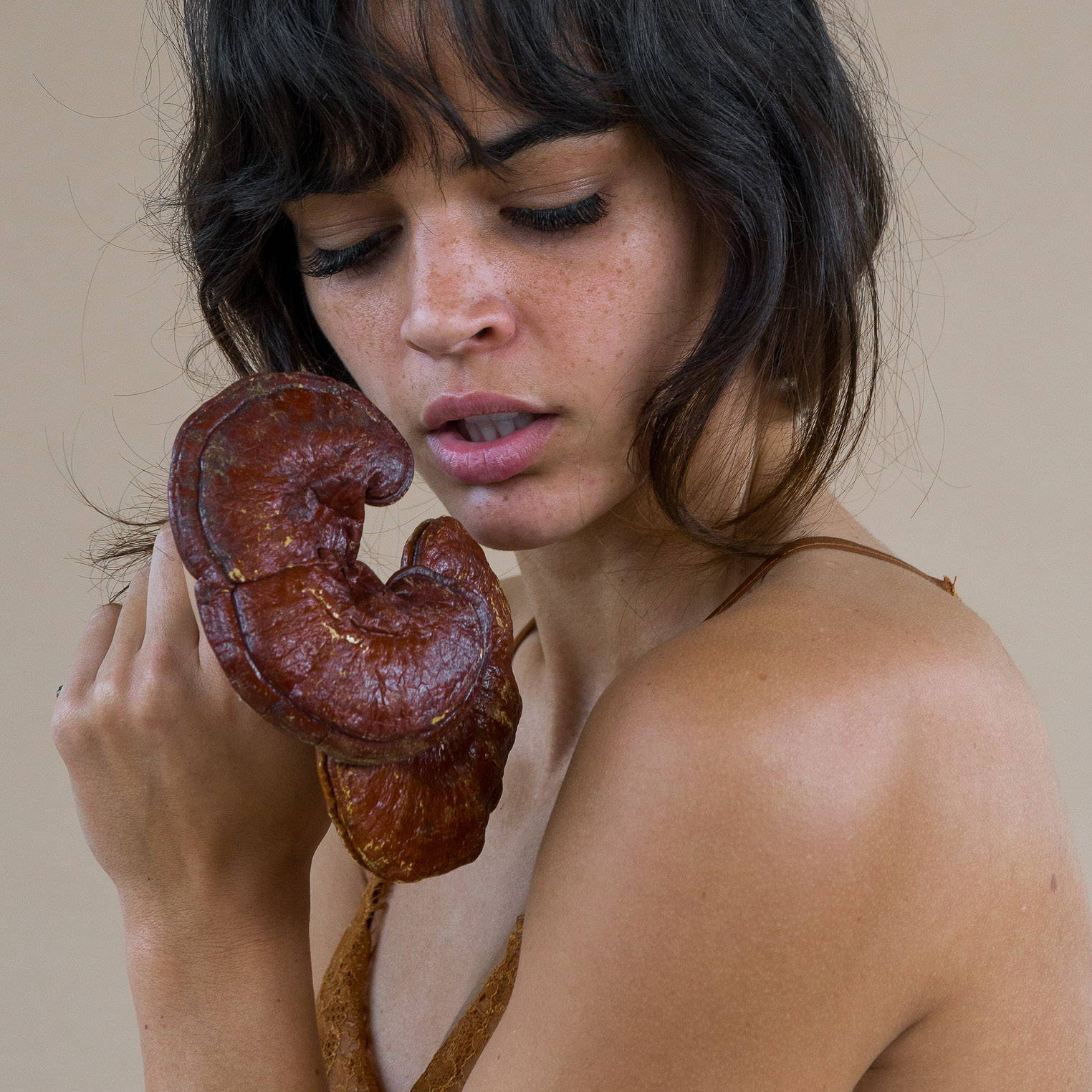 A HISTORY IN THE MUSHROOM

The ability to isolate key active compounds for medicinal use from fungi, happened less than a century ago. In 1928 Alexander Fleming first discovered penicillin from the Penecillium Fungi, and it revolutionized our ability to treat infections in the mid 20th century.

That was just the beginning. Since then, we’ve discovered a treasure trove of various compounds from a wide variety of fungi to treat and prevent a host of different diseases.What science is now telling us is… it’s the active compounds called the “Beta-Glucans” inside these amazing fungi that are chiefly responsible for our health improvements.

However, depending on how the mushrooms are grown, and which parts of the mushroom are harvested… will produce wildly different quantity & quality of Beta-Glucans.

"At Aneu Apothecary, we believe in doing things right…

or not doing them at all."

We only use the fruiting bodies, grown the way nature intended - on hardwood.

To produce the most potent and powerful immune health supplement on the market.

Each batch of products are tested, and scientifically verified for their Beta-Glucan content ensuring you get exactly what you’re paying for in each dose.

4. NO GRAIN NO FILLERS

We micronize our powders for increased bioavailability and efficacy in the body.